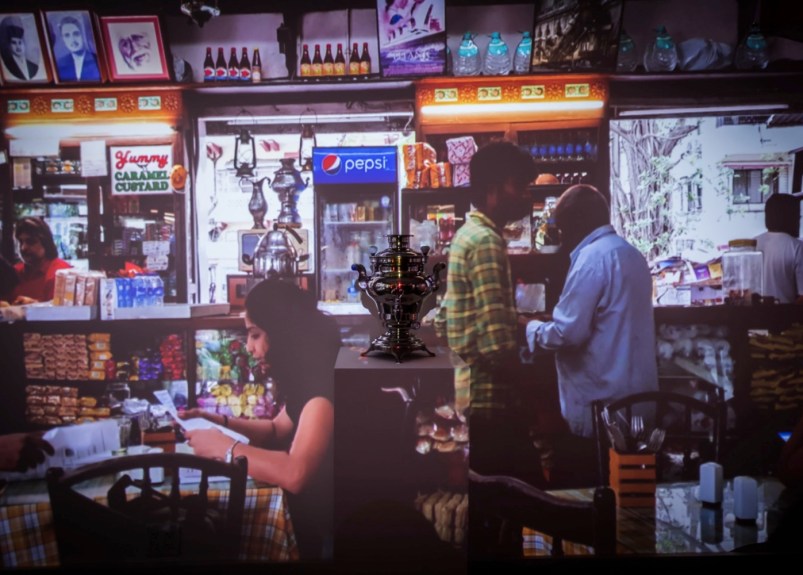 Sitting in an Irani café today, one may be struck by the coming together of different cultures, languages, design aesthetics, iconography and typography within one space. In contrast to other cafes, where storage for food items is usually hidden or covered up, the open display of numerous items, along with an amalgamation of religious, cultural or social elements, creates a kind of heterotopia, allowing for different people to connect with the space differently.

Existing for over a century now, these cafes embody fragments of the dynamic social, cultural and global values embodied in the city formerly known as Bombay, which underwent a drastic transformation under the rule of British colonization. Iranis are Zoroastrian immigrants who migrated to Bombay towards the end of 19th century. To meet the growing demands of creating spaces for public life, Iranis began setting up cafes in the 1870s, serving inexpensive food to working-class communities and allowing city-dwellers to take a break from the constant bustle of city life. Today, stepping into these cafes and visually experiencing their eclectic environments serves as a reminder to a century old history. Iran cafes are a repository for the city’s culture.

Using the context of the metropolitan city of Mumbai, this project aims to reconstruct the multiple layers of visual, spatial and historical evidence present in an Irani cafe. Projected images constitute the environment of this quasi-real café, within which physical objects and other artifacts are presented using the aesthetics of a museum display. Virtual and physical fragments are juxtaposed. The exhibit also uses texts and photographs of objects like chairs, vintage advertisements, and cultural and religious artifacts to observe how migration, colonization, trade and travel has influenced the décor and cuisine.

This project explores the coming together of a historic interior space, which may not be intentionally designed yet possesses cultural and social integrity, embodies stories of migration, looks beyond the polemics of colonization, and aims to create a sense of cosmopolitanism, which is crucial in today’s times.